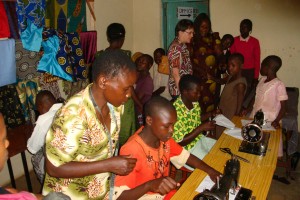 One of Kidsworld priorities is to further the quality of life in the communities
where we are active, through the development of life skills, particularly
of the underpriviledged in those communities.

This we accomplish through our shared Community Development Projects
through which we help alleviate poverty by initiating and facilitating training
projects together with local community groups & leaders.

These training projects include handicraft, trade skills, agricultural training
as well as commercial training & micro financing opportunities,
… in local areas there where our Street Kids Centers are. Launch of Phase 2 of the KidsWorld Family Feeding Project.
Today we are adding 10 more families to the project, with five
families in Maili Saba and five families In Wamuini.
Thank you Helen & Dawson and all the locals who continue to help
make this project a success.

In 2010 we met Hellen Mwashi the leader of the Hearns Centre in Maili Saba, a village in the Kitale district.
At that time they were in a small rented room where they were training 4 girls at a time in basic sewing skills.
We saw the opportunity to help grow their centre as well as benefiting from Hellen’s knowledge and skills.

With the growth in Skills Training opportunities it was soon obvious that we needed a bigger centre, as well as the number of Street Kids the Centre was caring for having grown to 10 kids, we erected a small building consisting of 3 rooms, which would see us through the next few years.

At the end of 2015 we had our first ‘official’ graduation for six very proud young girls, who over the past year not only learnt a life skill themselves, but whose efforts during their year of training, greatly assisted in the care of Hearns Centre’s Street Kids.

Hellen and Dawson surveying the new Hearns Kidsworld
property and building which has just been completed.
In the new Centre Hellen will now be able to train 16 girls
whilst continuing to care for and school our 10 Street kids
Maili Saba, Trans Nzoia County, Kenya.

The first Container arrived from Step30, an outreach group from Taiwan.
We are assisting them with the sorting and distribution of shoes amongst Street Kids, Orphanages and schools. Once the containers are empty, Kidsworld has the option of having some of the containers, and which we will use in our Creative Container Project, for schooling, creative training and skills training.
View Creative Container Brochure